Andy started teaching bridge 6 years ago and as he really enjoyed it, he has now become a full time bridge teacher where he has been giving lessons at various bridge clubs in the surrounding Brisbane area, as well as private coaching to pairs/groups that are looking to improve. 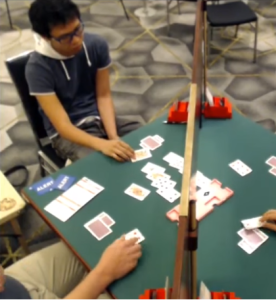 SOME   BIOGRAPHY   ABOUT   ANDY

Q: How old were you when you started to play Bridge?
I was about 16 when I was introduced to this fascinating game of Bridge!

Q: How did you get into Bridge?
Back in high school my friends and I would play some card games during the lunch breaks. Our usual go-to game was "Big 2", a very fun and classic game played with two to four players. However, one day we decided to spice things up as one friend knew about Bridge and he taught to all of us.
The version of Bridge that we were taught was similar, but also somewhat a little different, to what we all play. The differences were:

- There was no dummy! This allowed everyone to participate in the play, but this meant little logic was applied in the play, and it required more partnership trust and chemistry!

- There were two extra denominations in the bidding:

1. The Small No-trump. This was ranked below clubs (so you can overcall 1-club over 1-Small-NT), and the way it worked was essentially the same as the normal NT (i.e. no trump suit), but the order was reversed. Aces were now the smallest cards, and deuces were the highest cards! This made it enjoyable even if you were dealt a bad hand!

2. The Middle No-trump. This was ranked between diamonds and hearts, and similarly, it is also a No-trump contract, but the order was bizarre. The highest card was the 7 (the most middle card), followed by the 8, then 6, then 9, then 5, then 10, then 4, etc.! This was surely a confusing but yet enjoyable one to play, but again, it allowed you to participate in the bidding if you weren't dealt honour cards, nor the small cards, but the "somewhere in between" cards!

As I thoroughly enjoyed the game, all it took from me was to search online more about the game, and that's when I read and learnt about the original rules of Contract Bridge.

Q: What did you study?

I completed Bachelor of Aerospace Engineering at Monash University in Melbourne.

Q: Why did you become a Professional Bridge Player and a Bridge Teacher?

After finishing university, it was too difficult to find a job given the small aerospace industry in Australia, but also there was an oversupply of graduates. During my university years, I was still finding the time to play bridge as it became a passion of mine. I can still remember very disinctly the first time I represented Australia in an international tournament (the 2006 World U20 Youth Team Championships) where our team, the darkhorse, came equal second in the Round Robin. Unfortunately, our team was quite inexperienced in the playing the Knockout Stages so we lost our semi-finals as well as the bronze playoff..

Besides playing bridge to improve my own game, I was also spending a lot of time teaching and mentoring other youth players from around the world. With the rise in internet and technology, I was able to mentor players via Skype as we played on Bridge Base Online (you can play for free!). As I loved to play and teach, I decided to then become a full time bridge teacher and player.

Yes I certainly do! At this current moment I am enjoying the playing, the teaching, and have started to run Bridge Holidays around Australia (and soon overseas, with the upcoming St. Petersburg Bridge Holiday in early October).

My goal is to win a World Teams Championship one day (I can dream!), but because I love teaching and coaching, I hope to be one of, if not, the best Bridge Coach in the world one day!

Q: What was the most profound bridge advice that you have ever received?

The best advice I ever received was:
"Bridge isn't about making fancy bids or plays that will get you into the bulletins or newspapers, it is about limiting your mistakes. We, even world class players, are all bad at this game - it is just about who or which team is the least bad!"

Q: Do you have any memorable hands?

I have too many to list. The one that has left a psychological scar on me was when my partner and I had a very scientific auction to 7NT in a World Championship. Why is it memorable? Oh, did I forget to mention it was doubled? As well as missing two aces...